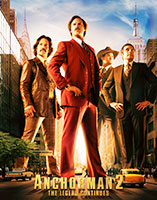 In the early 1980s, the crew of Anchorman reunites in New York City for the launch of the first 24-hour news TV station. We put this on at one in the afternoon on a grey Saturday when my lady friend had the flu, and it was suitably decadent. This movie will not go down in history as the funniest comedy ever, but it has its share of laughs and it's a good ride if you're willing to be entertained. (Last viewed: March 2014)

More About Anchorman 2: The Legend Continues:
=> Read what people say on Amazon
=> Add your own Review or Comments below

Some of the Cast of "Anchorman 2: The Legend Continues"