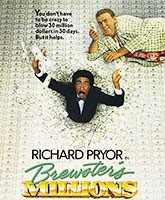 A man is the beneficiary of a huge inheritance that comes with a caveat: to keep it, he must spend thirty million dollars over the course of thirty days. This premise leads to extravagant expenses that are inherently funny, but I can't help but feel that more could have been made of the situation. Although likeable in the role, Richard Pryor gave the worst performance of his that I've seen on film.

Watchable, but with low expectations.

More About Brewster's Millions:
=> Read what people say on Amazon
=> Add your own Review or Comments below


Some of the Cast of "Brewster's Millions"