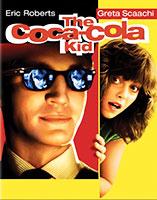 A corporate star is sent from the Coca-Cola Company of Atlanta, Georgia to troubleshoot operations in Australia. He soon discovers a sore spot: a valley where a soft-drink bottler has been keeping Coke out of the market for decades.

This is not a laugh-out-loud comedy, but it is funny all-right, what with the fish-out-of-water scenario and the yankee's terrific Southern accent. It has outstanding production value for an Australian movie. First, the plot manages to stay together for most of the film while incorporating a great number of offbeat moments. It has great sound—including a terrific Coke jingle and a compelling rendition of Waltzing Matilda. And it has visual appeal, by which I am referring to the landscapes and overall composition, though the blokes of the time must have enjoyed the eye candy thrown their way in the form of female nudity, which was common in contemporary films. The female in question later played the Italian mom in another Australian classic, Looking for Alibrandi.

Although this is not a roarer, it's an easy watch and a Down-Under classic which has aged remarkably well—so don't let the vintage label keep you away. (Last viewed: April 2014)

More About The Coca-Cola Kid:
=> Read what people say on Amazon
=> Add your own Review or Comments below

Some of the Cast of "The Coca-Cola Kid"