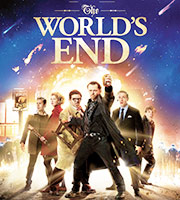 Returning to their home town for a pub crawl, five friends realize that it has been taken over by robots. This is a zombie movie in disguise. Zombie movies have never been my cup of tea. The best thing about this movie's zombie factor is that the gore has been minimized—the zombies look good and their blood is blue. But there is a lot of chasing and fighting that distracts from the main reason I sat down to watch the film: comedy. On the comedy side, the film has some good moments, but it is never a roaring laugh. The lead character is overly theatrical for my taste, and the humor is as tepid as the zombie-robots' blue blood. Overall, an easy skip. (Last viewed: December 2013)

More About The World's End:
=> Read what people say on Amazon
=> Add your own Review or Comments below

Some of the Cast of "The World's End"