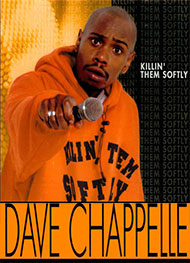 
Unlike his later awful show entitled For What It's Worth, this is a fine set where Dave showcases his keen intelligence (rather than the far more widespread ability to name reproductive organs) and puts it to the service of making us laugh. To great effect, Dave alternates seamlessly between a casual "black" voice and a straight "white" voice, leaving you to wonder how he sounds when he is just himself. Topics include discovering how leniently police handle a white friend of his driving intoxicated, assessing a politician's character, and differences in male-female approaches to storytelling.

Update (2021, eight years later): this set aged well. I've grown increasingly disappointed with Dave's recent sets and wanted to watch this one to check whether his earlier material still worked for me. It does. And some of the topics are painfully current.

More About Dave Chappelle: Killin' Them Softly:
=> Read what people say on Amazon
=> Add your own Review or Comments below

View all the sets by Dave Chappelle we've reviewed