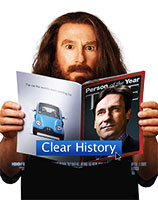 Publicly ridiculed for having sold his stake in a start-up company months before it would have earned him a billion dollars, an aging exec moves to an island after changing his name and appearance. Ten years later, his former business partner moves to the same island but doesn't recognize the man who would be happy to blow up his mansion. I laughed. This film is a treat for fans of Larry David and Curb Your Enthusiasm. More than that, it is one of the funniest comedies in recent years (which, admittedly, will not be remembered as the golden years of the comedy genre). (Last viewed: September 2013)

More About Clear History:
=> Read what people say on Amazon
=> Add your own Review or Comments below

Some of the Cast of "Clear History"