The Fall of the American Empire 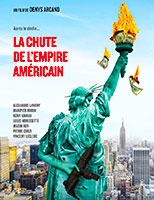 A philosophy graduate working as a delivery man witnesses a robbery gone awry and appropriates the loot. In his efforts to protect his fortune from gangsters and the police, he meets a series of interesting characters.

This is a light-hearted movie rather than a laugh-out-loud comedy. I found it highly enjoyable as well as strangely ethical, but I have no formal training in that discipline, so what would I know?

Denys Arcand has shot his share of mediocre movies, but this is not one of them. A worthy successor to The Barbarian Invasions.

More About The Fall of the American Empire:
=> Read what people say on Amazon
=> Add your own Review or Comments below


Some of the Cast of "The Fall of the American Empire"