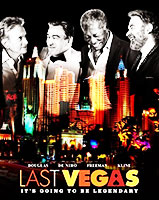 When Billy announces that he is about to get married in Las Vegas, his three friends of sixty years meet him there to throw him a bachelor party. This is a harmless Hollywood film that lets itself watch on a day when you're not feeling demanding. It has plenty of star power (Morgan Freeman, Robert De Niro, Kevin Kline, Michael Douglas), and the stars have no trouble carrying the movie. It has plenty of smiles, but if you're looking for laughs… look elsewhere. (Last viewed: February 2014)

More About Last Vegas:
=> Read what people say on Amazon
=> Add your own Review or Comments below

Some of the Cast of "Last Vegas"