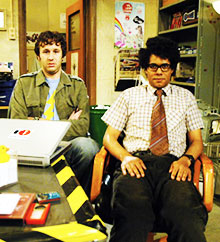 This series makes me laugh consistently, with the exceptions noted below. The relatively small cast and set keeps it simple and honest. I love Moss's character, but I guess everyone does. If you haven't seen the show, all you need to know is that it follows the adventures of the three members of an IT department.

On the first episode the thick lines of the caricature dampened my enjoyment, and it took me a few episodes to get hooked. Here are the episodes that work for me:

- All of season 1 (six episodes),
- The first half of season 2 (three episodes). The second half of the season is appalling. Not only does it feel as though they've swapped the writers for a new team that doesn't get the characters; there is a noticeable increase in budget that results in more complex plots and far fewer laughs.
- All of season 3 except the last episode (five out of six). For my taste the sixth episode lacks in compassion.
I don't recall season 4 in great detail, though I seem to remember it moved further away from the original concept.
(Last viewed: June 2011)

More About The IT Crowd:
=> Read what people say on Amazon
=> Add your own Review or Comments below

Some of the Cast of "The IT Crowd"