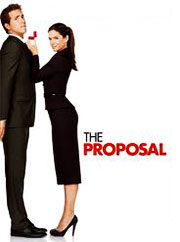 A Canadian national blackmails her executive assistant into marrying her so she can keep her New York job. When she travels to Alaska to meet her fiancé's family, she discovers that he isn't quite the "poor boy" she had pegged him as. I find Ryan Reynolds consistently funny, and the first half of the movie made me laugh a few times. It struck a few pleasant familiar chords—such as Meet the Parents and Green Card. Sadly, just as at it crosses the halfway mark, the movie abandons the comedy genre and powers on as a pure romance. This will make it a great watch if you love chick flicks, but in the world of laughs, the movie loses many points, though it's still worth a watch. (Last viewed: January 2013)

More About The Proposal:
=> Read what people say on Amazon
=> Add your own Review or Comments below

Some of the Cast of "The Proposal"