Whoopi: Back to Broadway 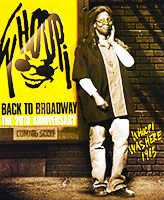 
Taken as a piece of theatrical performance, as a monologue, that show was enjoyable for me. As stand-up comedy, it was a waste of time.

Incarnating various characters, Whoopi reminisces on some times of her life — some personal, some public, such as the war in Irak — and invents others. It has historical value, it's often touching, but it's not the kind of material that can trigger laughter, at least not for me: in the case of Irak, not that long after the events.

Some of the personal topics include waxing, menopause and depression: maybe some of you all will be curious about Whoopi's experience or find something you can relate to.

More About Whoopi: Back to Broadway:
=> Read what people say on Amazon
=> Add your own Review or Comments below

View all the sets by Whoopi Goldberg we've reviewed